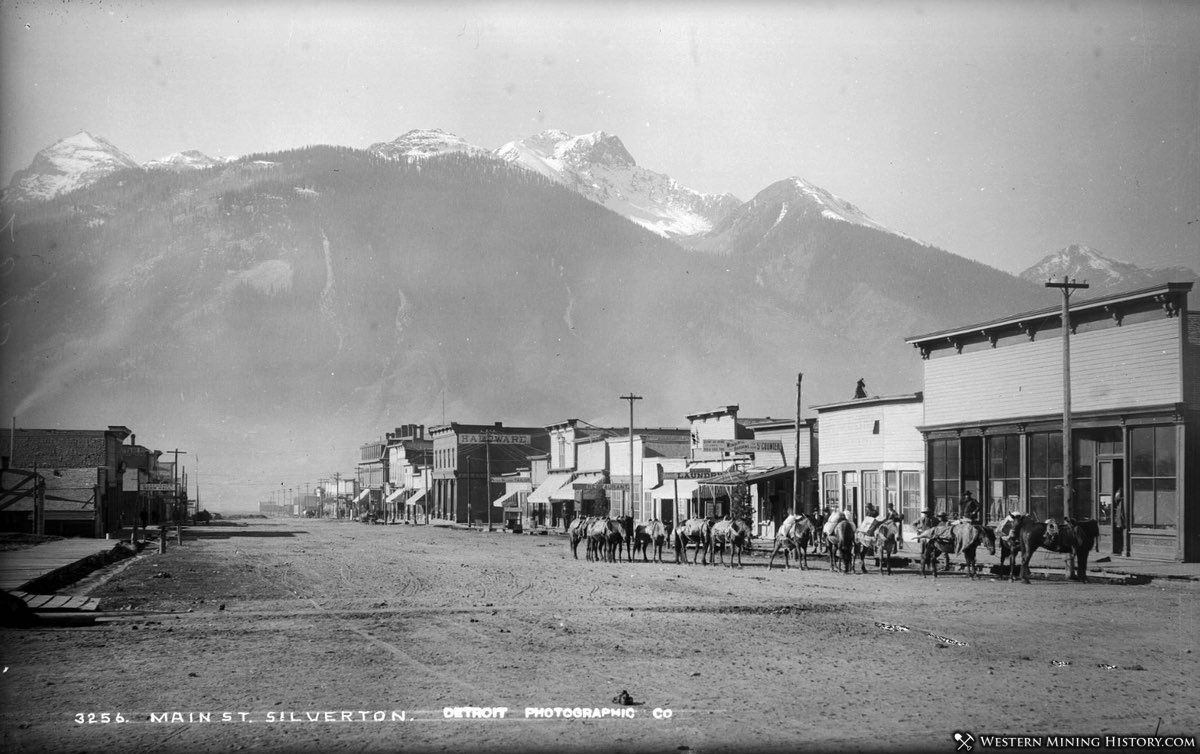 The San Juan mountains of Southern Colorado may be the oldest known major mineral-bearing area in the United States. Spanish settlers resided south of here in New Mexico’s Rio Grande Valley by the 1590s, and by the latter decades of the 1600s had explored north in search of mineral wealth. The name “San Juan” was given to the rugged mountain ranges of southwest Colorado by these Spanish explorers.

The mineral wealth of the San Juan Mountains was known to the Spanish explorers at least 150 years before the California Gold Rush that brought the world’s attention to the potential riches of the West’s unexplored regions. Ultimately the Spanish retreated back to Mexico and although their discoveries were recorded in journals, the knowledge of the wealth in these mountains was lost. 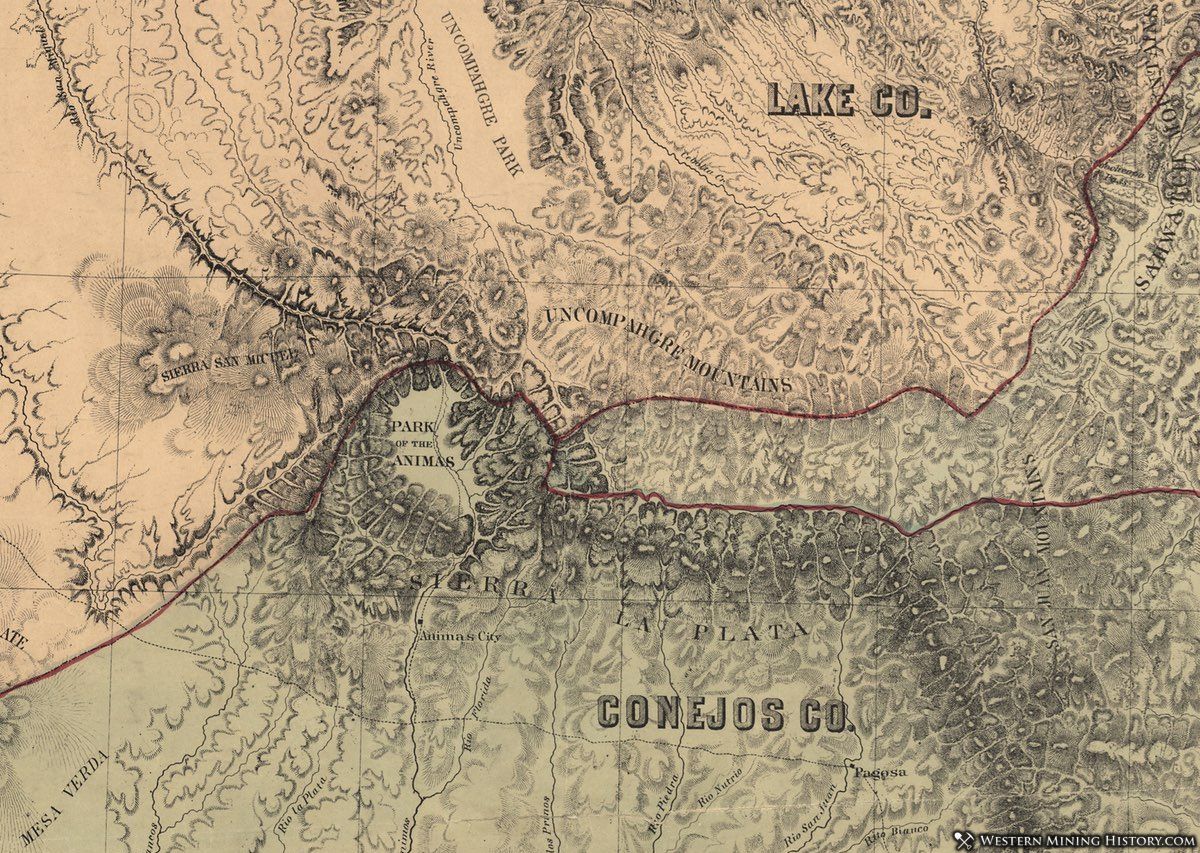 In subsequent years fur trappers entered the San Juans but fur was their primary focus, and although some of them must have certainly panned for occasional gold or recognized an outcropping of metal-bearing ore, mining in the region was not pursued. It was not until the great California Gold Rush of 1849 that the nation’s focus, and imagination, turned to the potential riches of the West’s numerous mountain ranges.

The first great mining rush to Colorado occurred in 1859, as prospectors by the hundreds, then the thousands, arrived in the vicinity of Denver, then pushed on into the mountains. The San Juan mountains were on the opposite side of the state, in what was the most rugged and inaccessible mountain area in the entire Rocky Mountains region. Nonetheless by 1860, a party of prospectors led by Charles Baker pushed deep into the center of these mountains, and discovered the valley that would be known as Bakers Park. 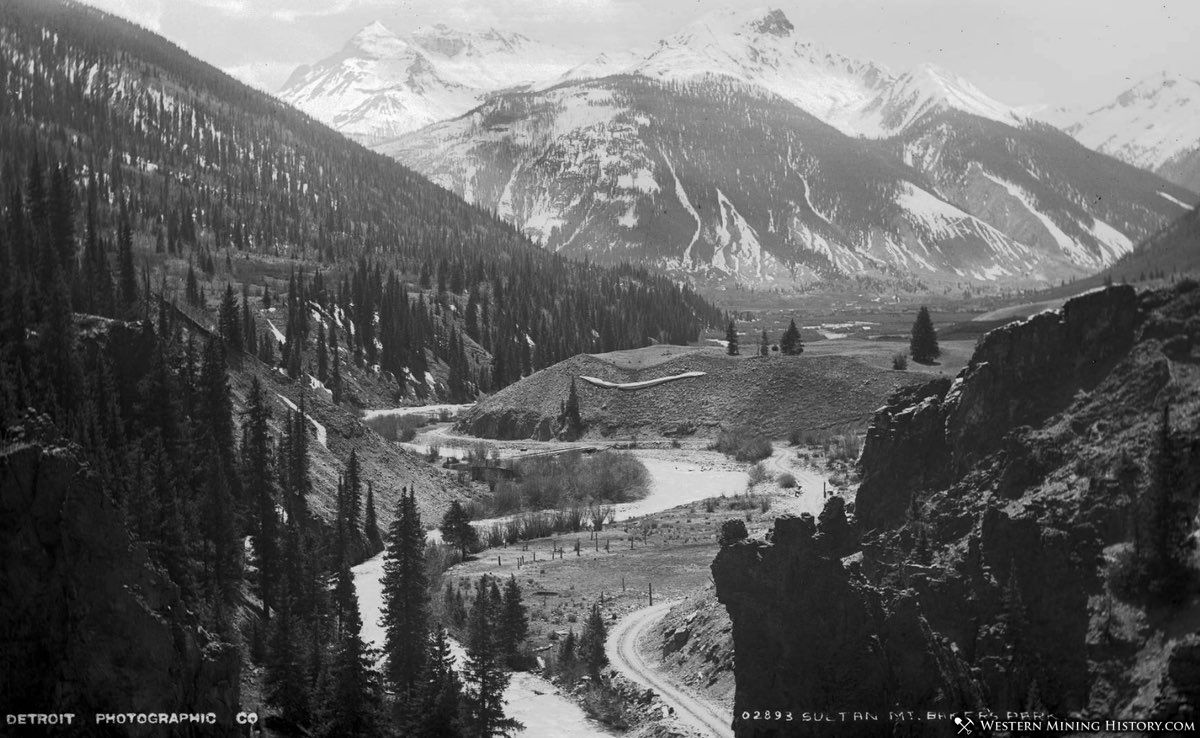 Word of Baker’s expedition got out, and in 1861 hundreds of prospectors set out for the San Juan Mountains. This initial rush ended in disappointment however as the extremely isolated and rugged mountains did not produce large amounts of placer gold, and many faced the prospect of starvation, exposure to harsh weather, and hostile natives. Dreams of San Juan riches were abandoned for almost a decade following this initial bust.

Prospectors and miners started returning to the San Juans in 1870, but by this time the area had become Ute land by treaty with the U.S. government, so the prospectors were breaking the law. Due to this, and the stark reality of survival in the nation’s most difficult terrain, they only stayed for a few months at a time for the next couple of years. 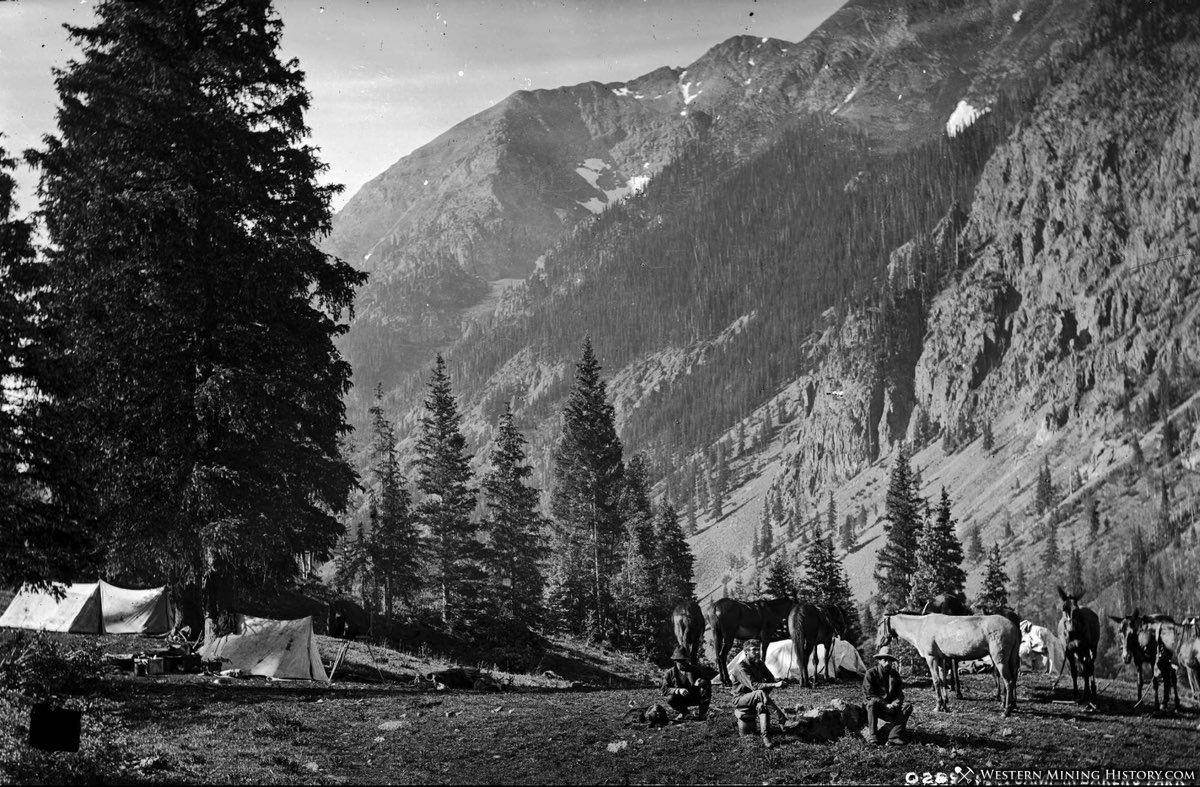 In 1873, with interest growing in the region's mineral wealth, the Ute treaty lands were revoked. The San Juans were now open for business, and prospectors finally began entering the region in earnest.

Deep in the heart of the San Juan mountains, in the valley known as Baker’s Park, two initial settlements were created in 1874. One was called Howardsville, and the other Silverton. Howardsville became the first government seat of newly-created San Juan County. 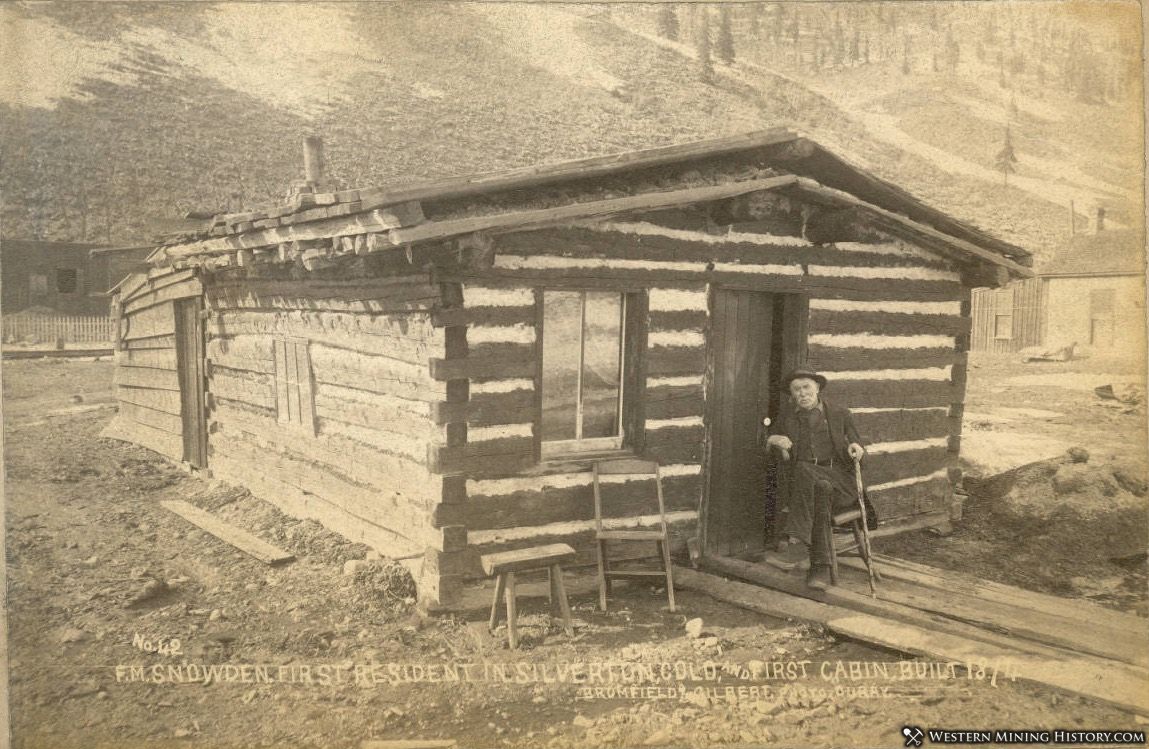 The Silverton town site was more desirable however, in a wide valley with plenty of room for the town and for mills that processed ore and timber. Silverton quickly overshadowed Howardsville, and later in 1874 took the county seat as its own. Although the town became the important center of the San Juan’s at an early date, it progressed slowly during the first couple years. In 1876, it was reported that just 300-400 people resided there that summer. 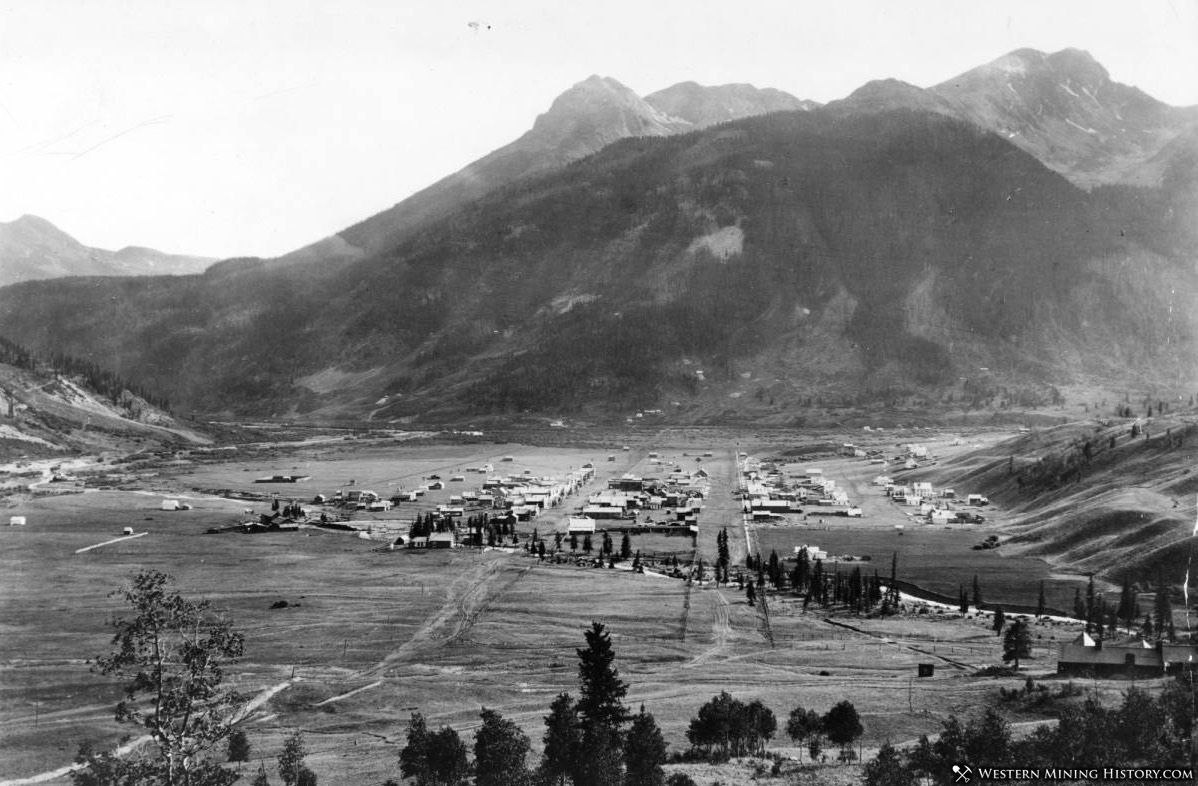 An article that appeared in the September 14, 1878 of the Colorado Springs Gazette described a travelers visit to Silverton:

We rode into Silverton about six o’ clock. Quiet as the town looked, we were just in time for a shooting match. These matches must be of frequent occurrence, as the one which greeted us caused no excitement. We did not even hear the cause or the result, if there were either. When I enquired of the landlord what was the matter, he replied, “Oh, nothing but a little shooting; it is Saturday evening.” 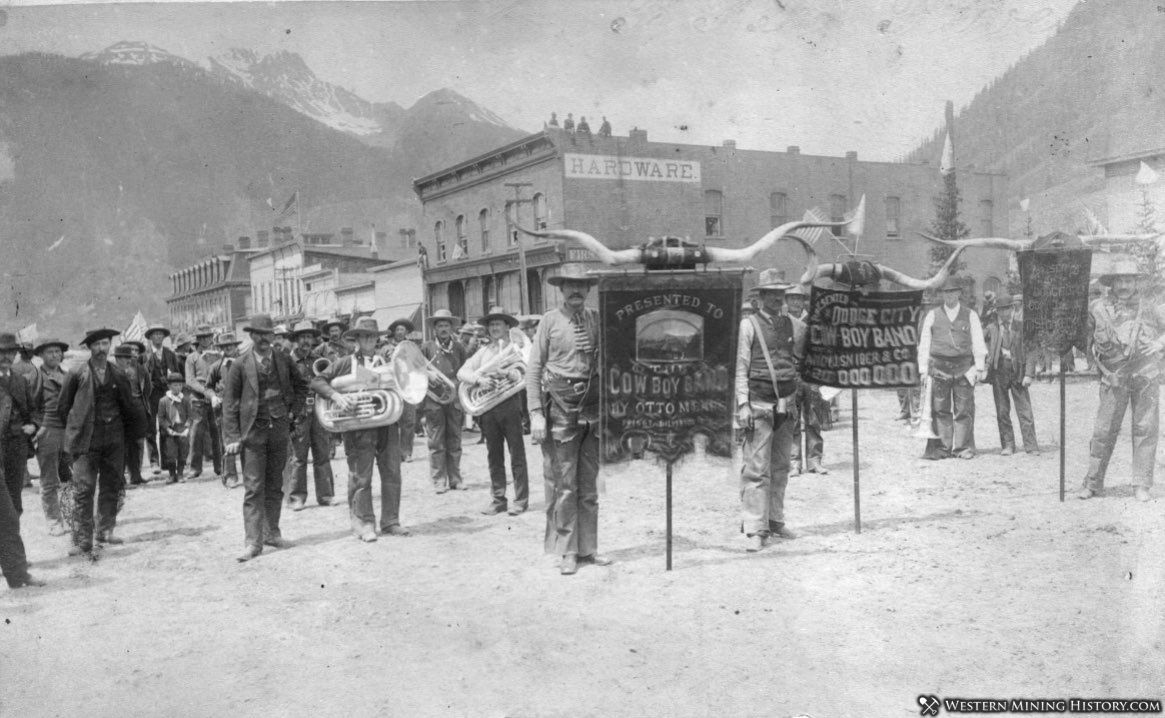 The mines of the region were rich in high-grade ore, but isolation and rugged terrain hampered early development efforts. The silver boom at Leadville in 1879 took attention and capital away from other districts, and the San Juan continued to languish.

The turning point for Silverton was the arrival of the Denver & Rio Grande railroad in July of 1882. This vital rail link connected Silverton to Durango and the outside world, and would greatly stimulate the local mining industry and the town. 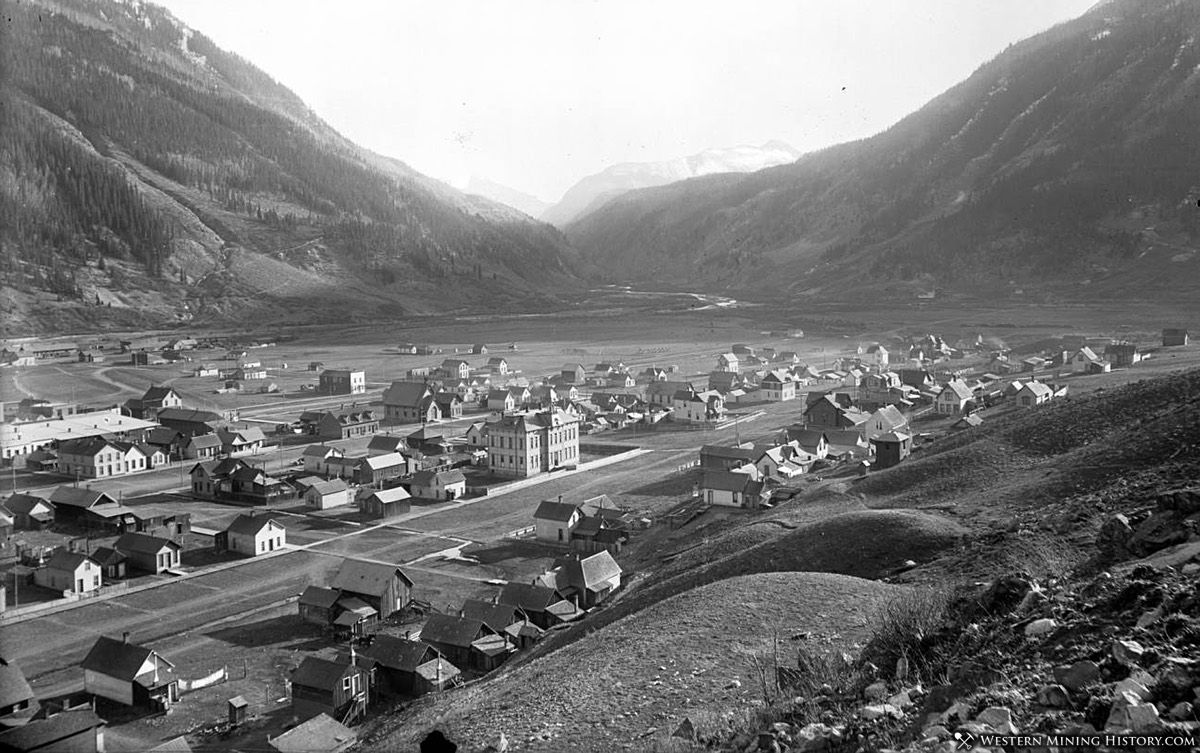 Silverton boomed in the 1880s and became the most important city deep in one of the nation’s richest mining regions. Up to thirteen newspapers were published here at one time or another during this decade. The town was the social, transportation, and commercial center for the numerous mining camps that were established near the mines, like Eureka, Animas Forks, Gladstone, Ironton and others. 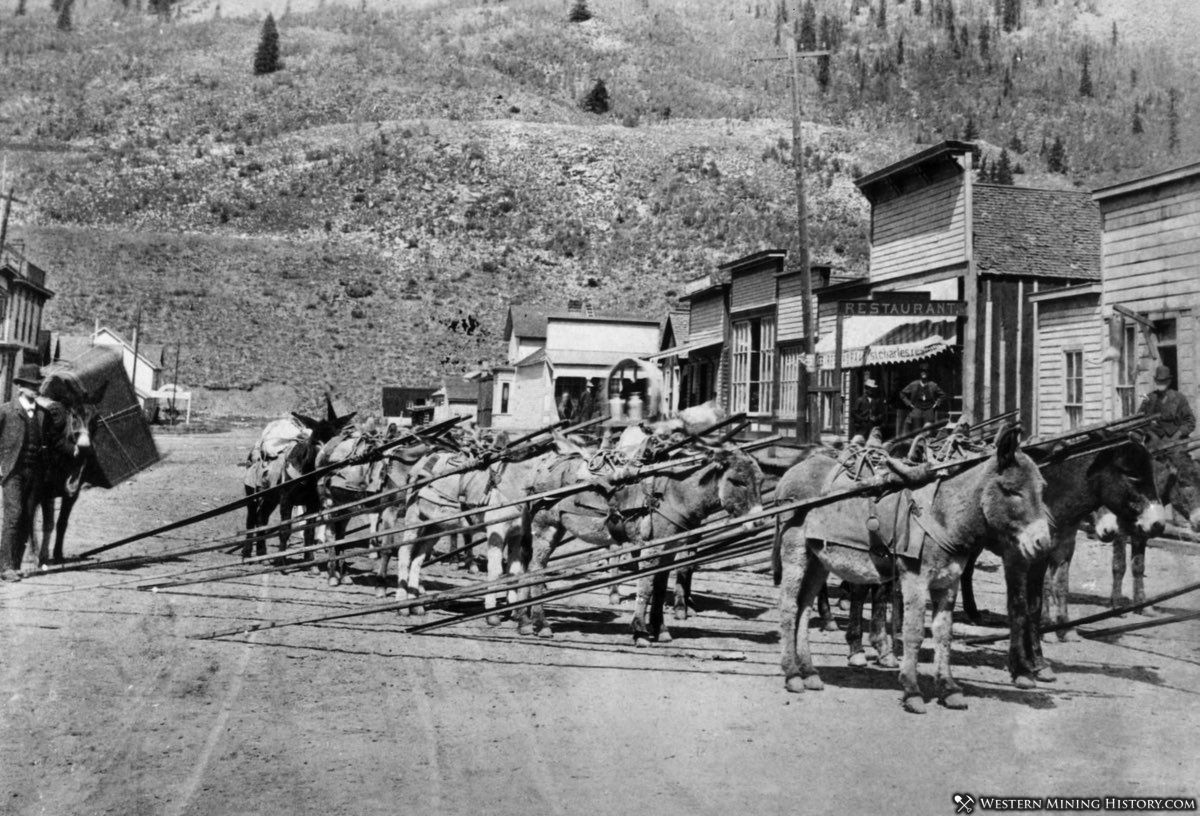 Burros loaded with track iron for mines at Silverton - September 1887

The San Juan Colorado Historical Society described the difficulty and dangers of life in early Silverton:

Early day Silverton was rough, turbulent and often violent. The environment was extremely harsh, especially the long severe winters. Mining was a very dangerous occupation with few, if any, safety precautions on the part of the mine owners. Mining casualties were frequent - falling down an open shaft, being blown to pieces in a powder explosion or the mine itself caving in on the workers. 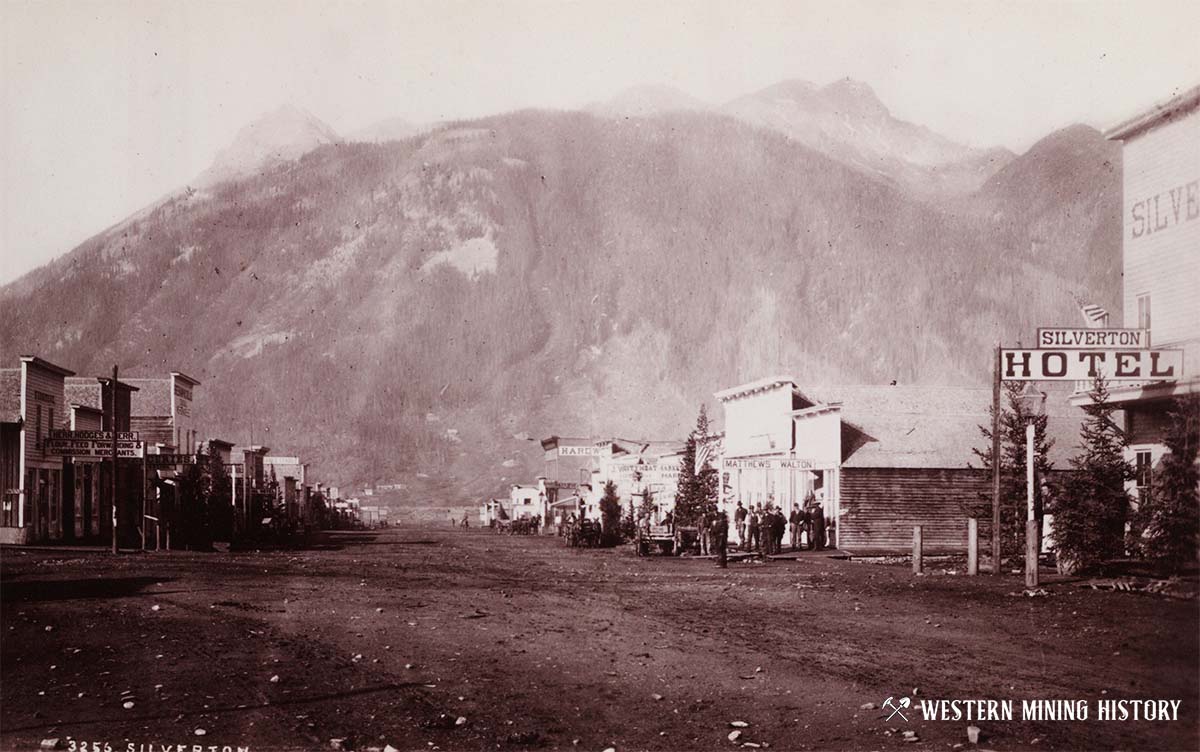 Snowslides carried many to eternity. Saloons, alcohol, prostitution, gambling, robbery, there were many opportunities to die violently. Suicides were not uncommon, especially among the prostitutes. Also in the early years of the town there were a few lynchings by the local vigilantes.

By 1885 Silverton had around 1,200 residents. Miners came from all over the world to work the local mines, including from Austria, Italy, Serbia, Croatia, Cornwall, Ireland, Wales, France, Germany, Russia, Norway, Sweden, Finland, Denmark. 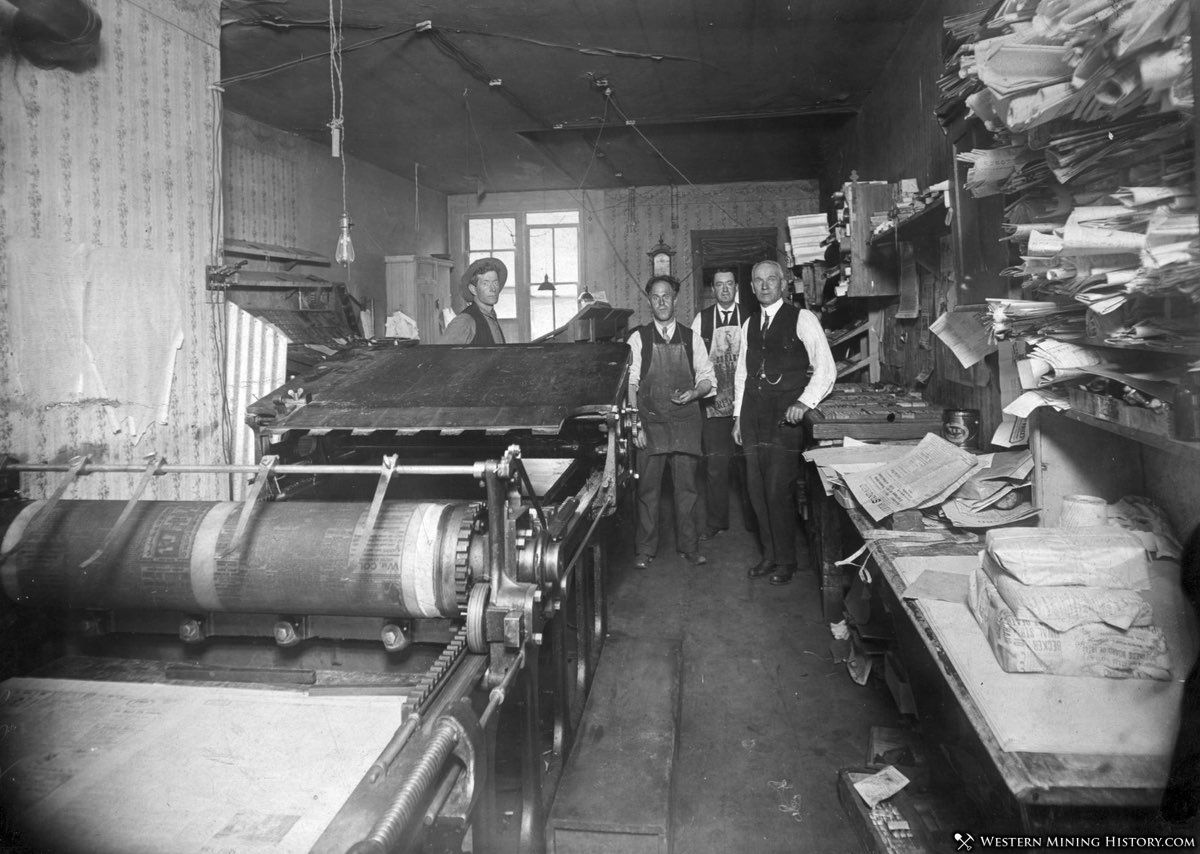 Interior view of the pressroom of the Silverton Standard newspaper ca. 1900

The town had many commercial businesses including bankers, butchers, grocers, assayers, restaurants, and of course numerous saloons (19 by 1899). Physicians, attorneys, civil engineers and other professionals filled Silverton’s growing professional class. 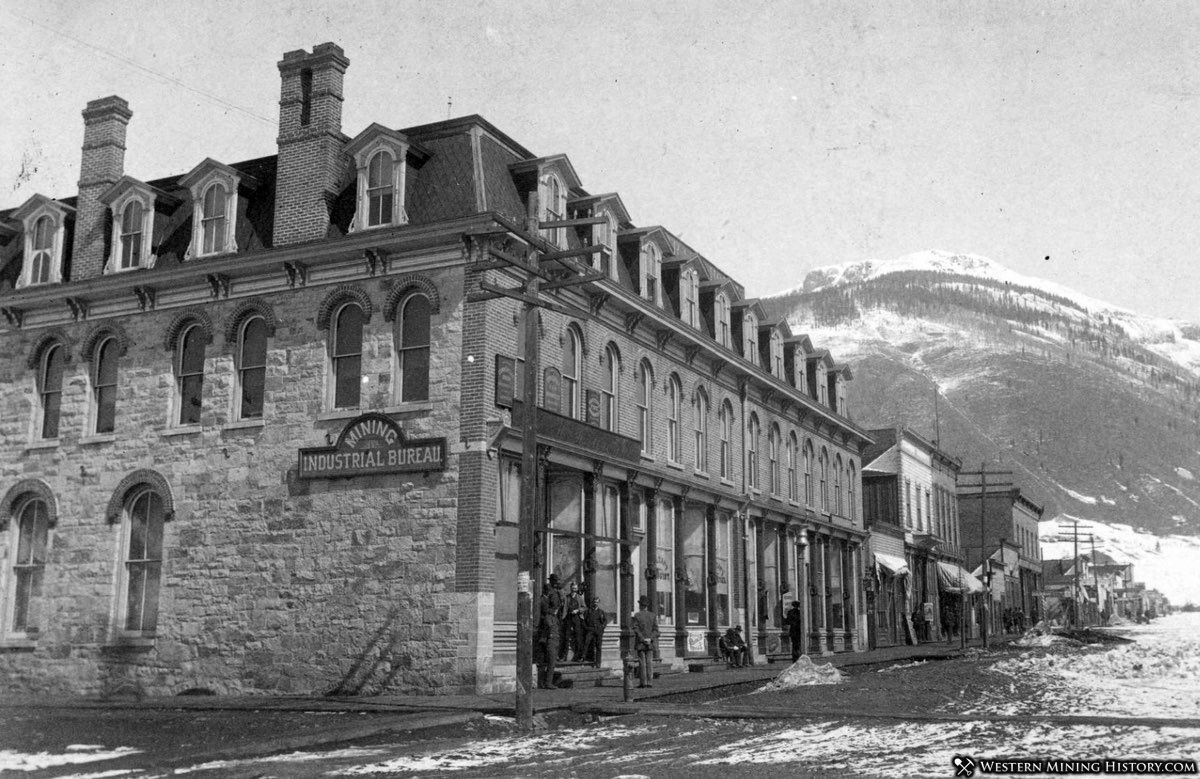 During the 1880s, the mines of the area were mostly silver producers with lesser quantities of lead, gold, and copper. Although never as rich or famous as silver mining centers like Leadville, Aspen, or Georgetown, the mines of the San Juan’s were numerous and the ores varied in their mineral content. As the years progressed, more gold was discovered, and as other silver districts suffered downturns related to silver prices, many Silverton mines diversified and persevered. 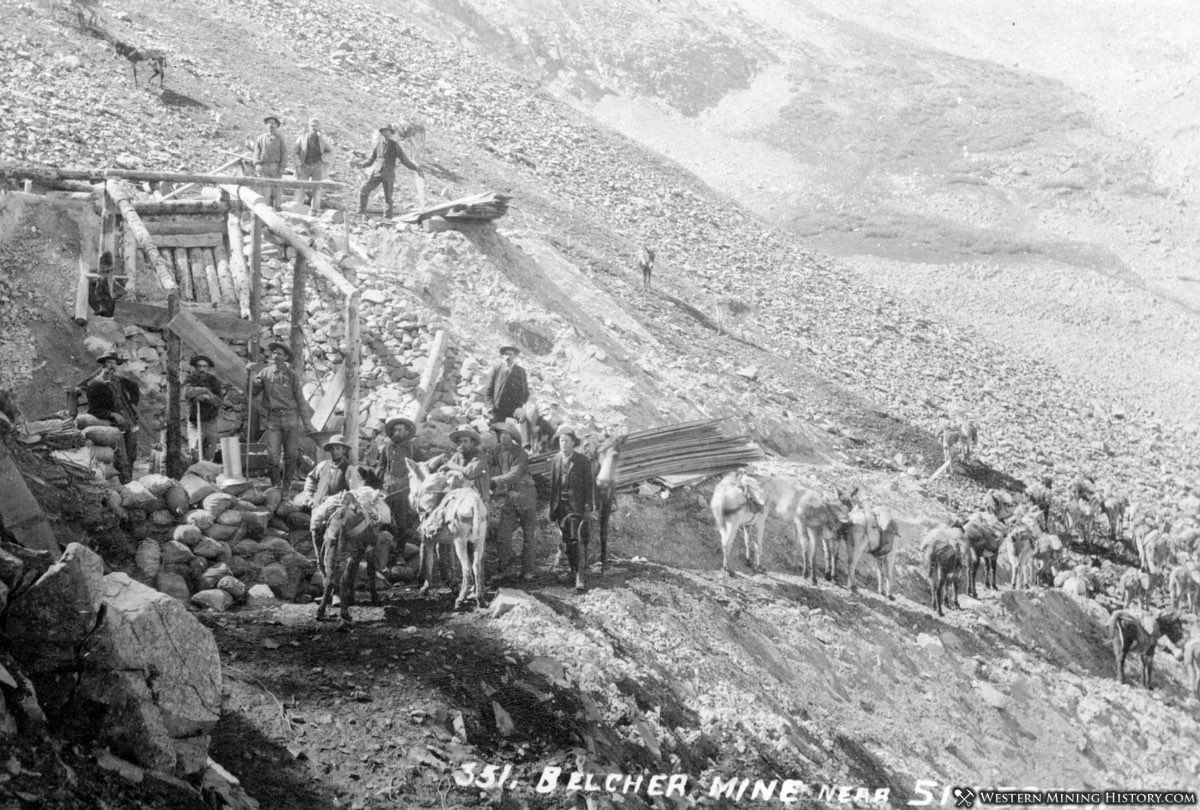 Belcher mine near Silverton

Despite the diverse ore of this area, the silver crash of 1893 still dealt Silverton a heavy economic blow. The 1890s after the crash were difficult times for most Colorado mining districts, but many of the San Juan mining companies continued producing silver, barely turning a profit, while diversifying into gold as new discoveries were made. San Juan County surpassed $1,000,000 in gold production for the first time in 1898.

Although Silverton was founded on silver, it prospered into the new century on the strength of the region’s gold mines. By 1905 the town had more than 3,000 residents. Mining technology continued to improve, new mills were built, and mineral production in the county surpassed one million dollars nearly every year prior to World War I. During this period Silverton became one of the most important mining centers in the state, along with Cripple Creek and Telluride. 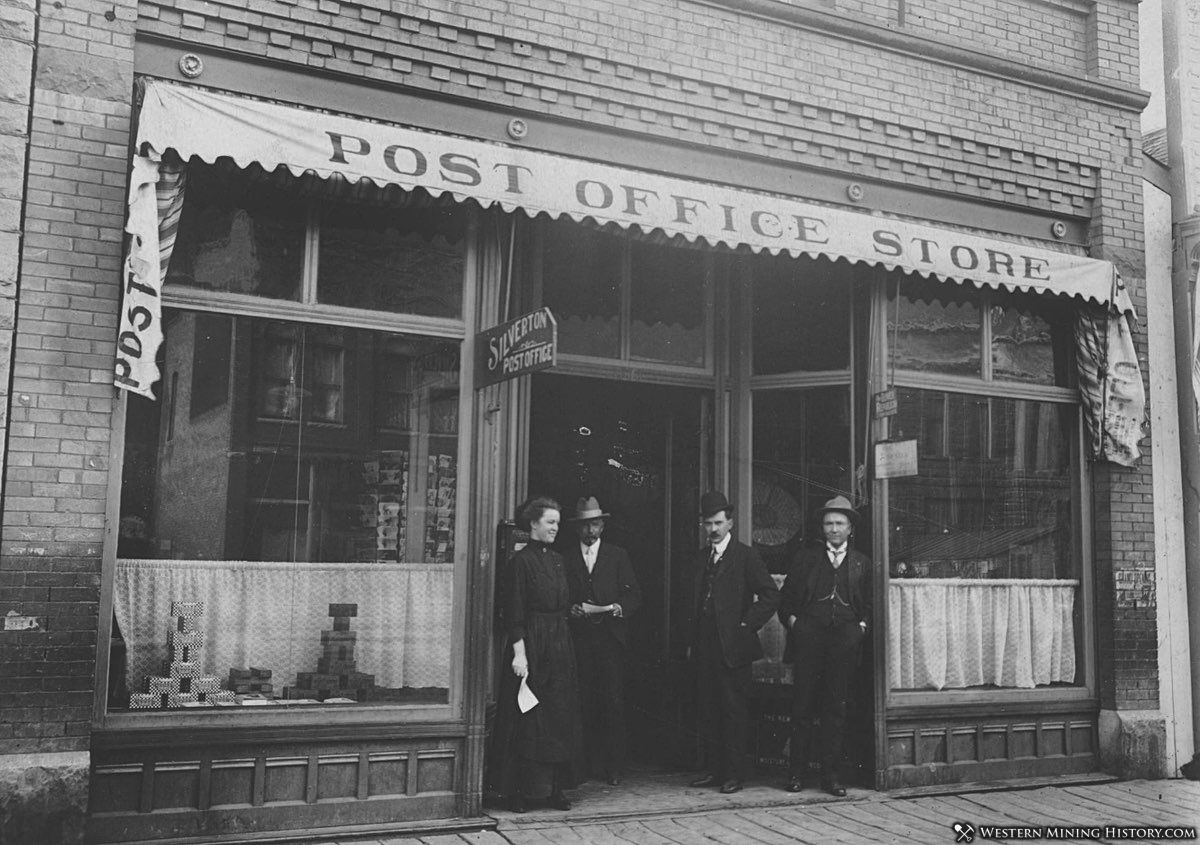 The 1918 flu epidemic was particularly devastating to Silverton residents. More than 150 people died within a three week period in October and November of that year, almost 10% of the local population.

Following World War I, declining metal prices resulted in a long decline of the Colorado mining industry through the 1920s. The crash of 1929 and subsequent depression did even more damage. By 1933 only five mines continued to operate, some of them only seasonally.

During this time the Shenandoah-Dives mine was the district’s top producer. The mine was managed by Charles Chase, a man that would be credited for much of Silverton’s survival during the Great Depression of the 1930s.

Chase kept the mine and mill operating even as metal prices reached all-time lows. He kept around 250 local men employed, fed the unemployed, and brought people throughout the community together to weather hard times by reducing housing prices and the cost of essential goods. 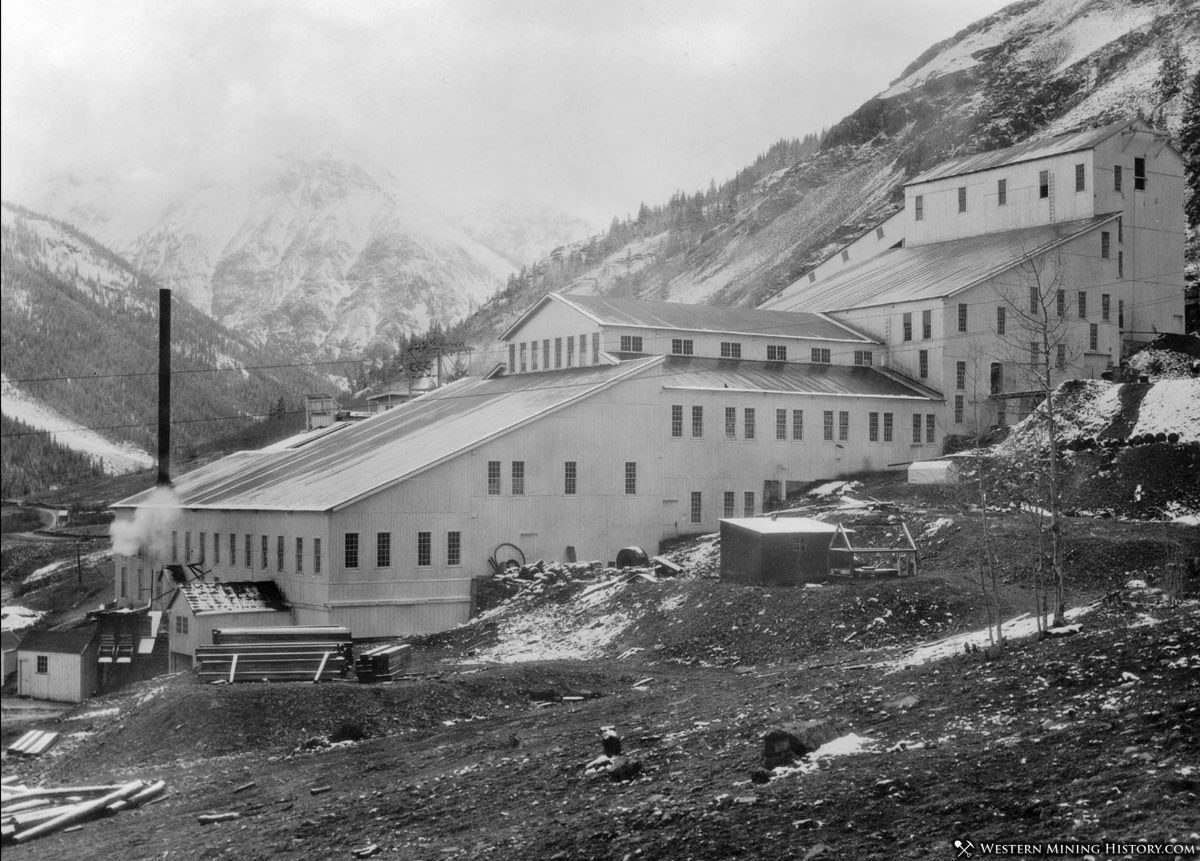 Shenandoah-Dives mine near Silverton ca. 1935

By the 1950s the mines of the San Juan were reaching the end of their viability. Factors like dwindling ore reserves, exhaustion of high-grade ore, environmental concerns, and low base-metal prices all played a role in the closure of most mines in the region. In 1953 the Shenandoah-Dives ceased production. 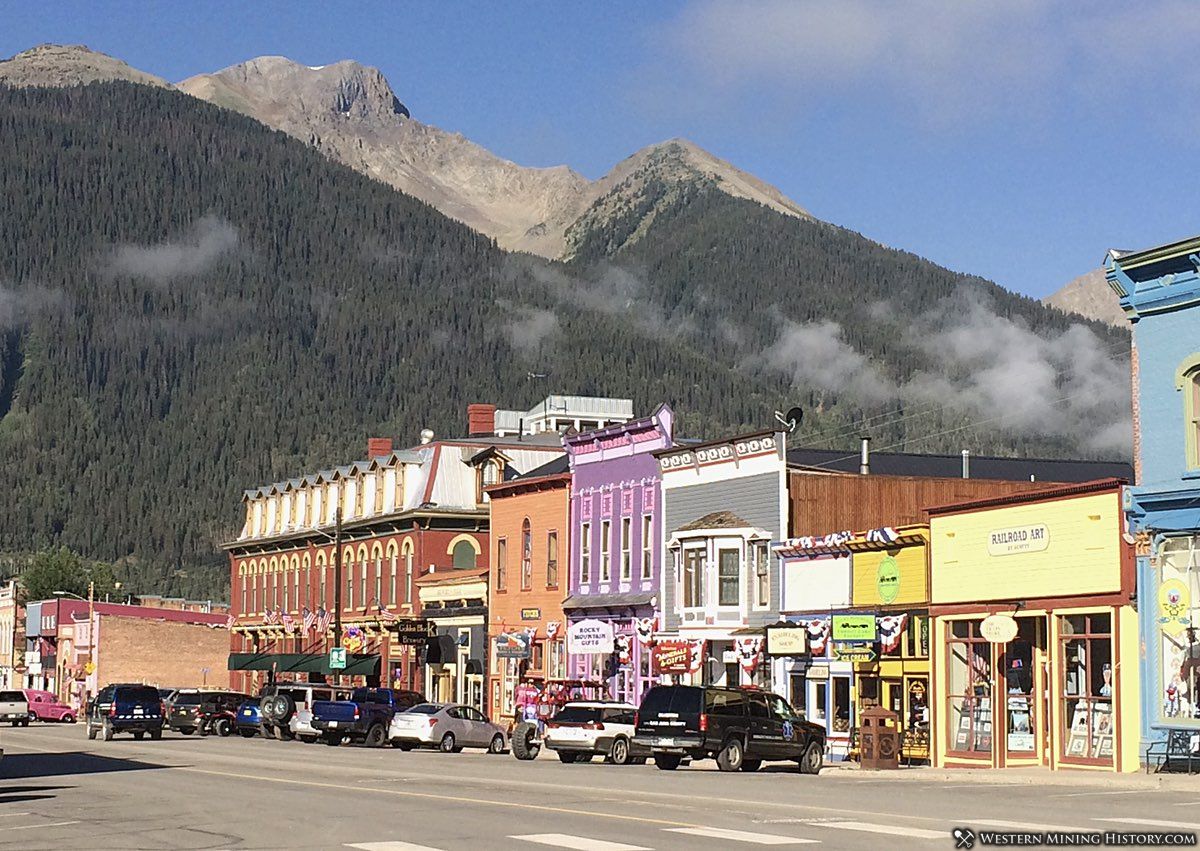 Transition to a Tourist Economy

As mining in Colorado waned, interest in tourism peaked during the booming post-war economy. Silverton’s location in one of the world’s most spectacular mountain valleys made it a desirable tourist destination, even if it was challenging to get to. 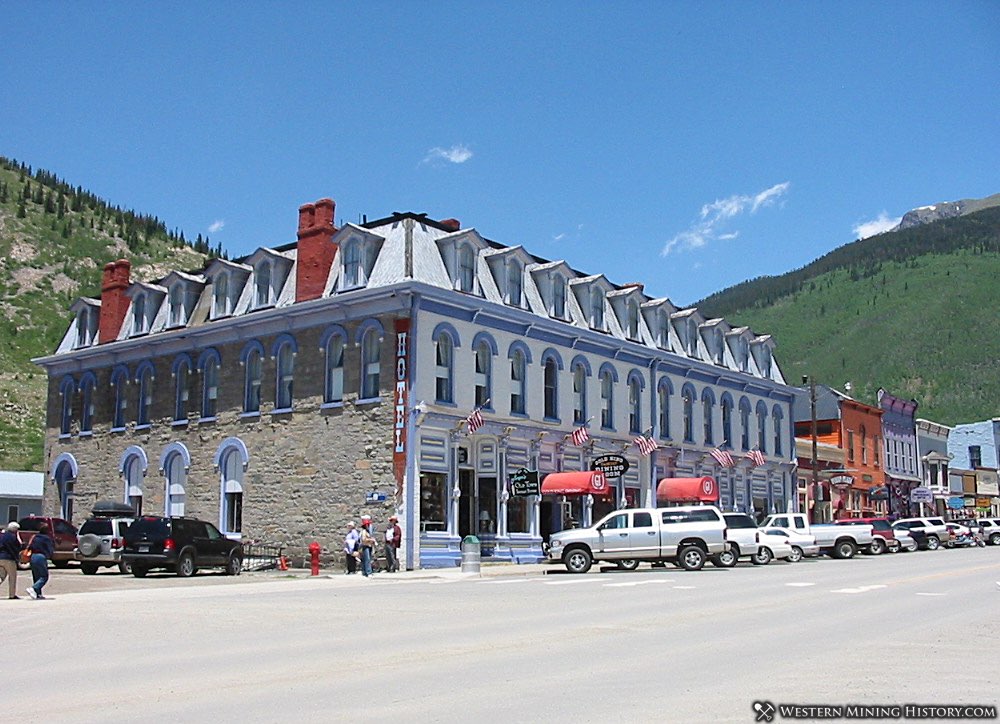 While tourism propped up Silverton’s economy during the summer months, it still had to survive the rest of the year. Interest in mining continued, and some of the mines resumed production intermittently throughout the 60s and 70s. By 1992 all the major mines had shut down, and Silverton was almost completely reliant on the tourist economy. 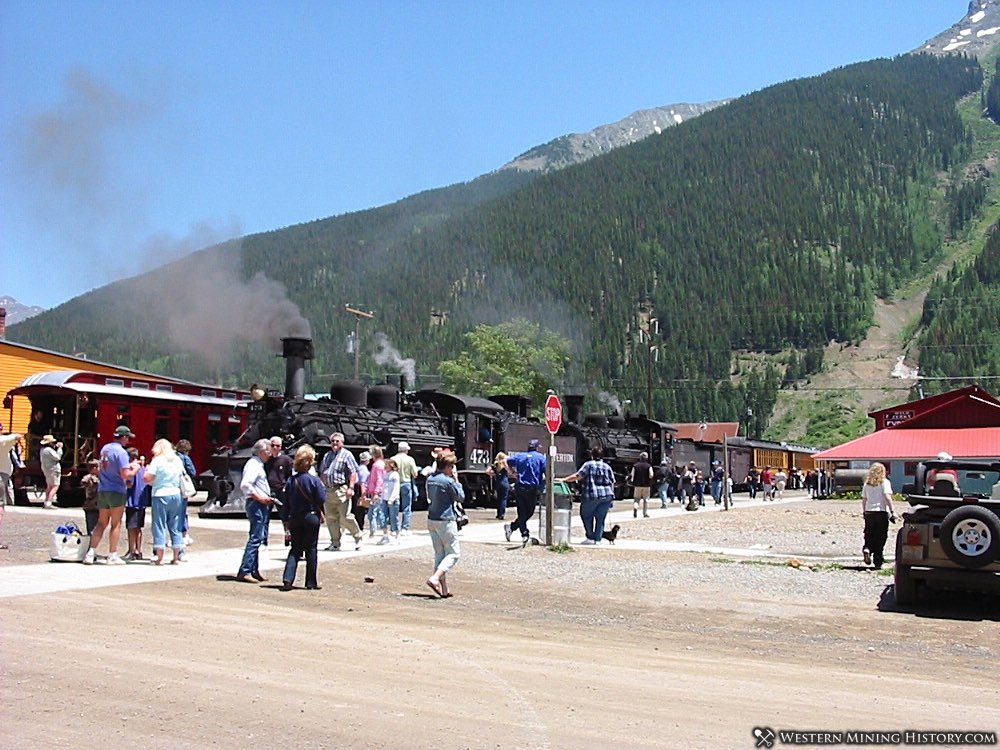 Tourists at the narrow gauge railroad at Silverton

Today Silverton survives as the only town in all of San Juan County, the nation’s most mountainous county. Many commercial buildings and private homes from the late 1800s have been preserved. Unlike other Colorado mining towns that have been completely transformed by major ski resorts, Silverton remains an authentic frontier mining town, and is one of the West’s most interesting historic locations.