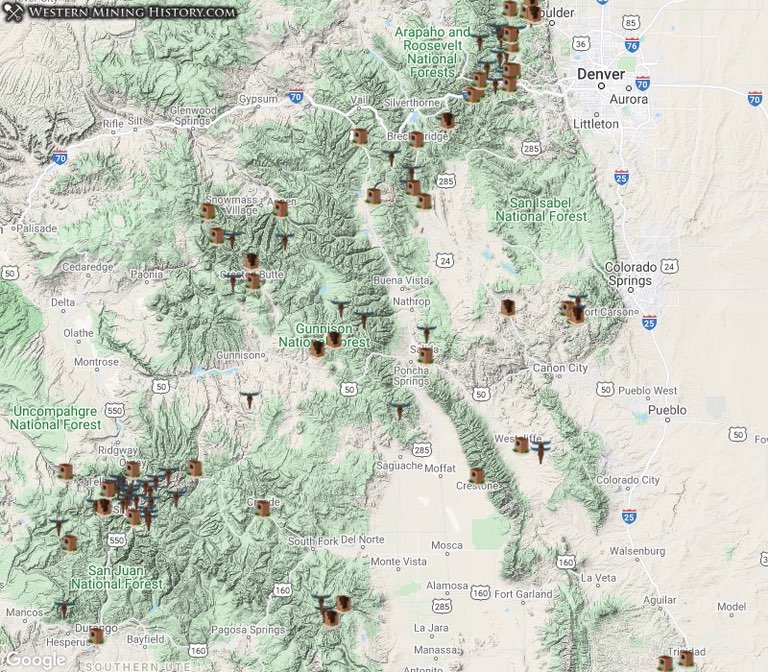 The bulk of the mining towns in Colorado are situated in the mountainous central and southwest parts of the state. The first towns were settled early in 1859 following the Colorado Gold Rush (or Pikes Peak Gold Rush) that started in the summer of 1858.

Initial discoveries were made in 1858, but the onset of winter forced the prospectors out of the mountains, and many of them formed camps and waited until spring to resume the search for gold. With the arrival of spring, new discoveries were soon made, and the first important mining camps of Colorado were established on the eastern slope of the Rocky Mountains.

By the mid-1870s prospectors had entered every corner of the state and new districts and towns were established in numerous locations. The following overview mentions some of the most notable towns during this period, but many more historic Colorado mining towns can be explored through the links above, or on our map of western mining towns.

Mining Towns of the Eastern Slope

In 1859 John Gregory discovered gold in what became known as "Gregory's Gulch", near the present day site of Central City. The Gregory's Gulch discovery is among the first important gold strikes in Colorado. Known as "The Richest Square Mile on Earth", the district became the economic center of Colorado for two decades.

Nevadaville and Black Hawk were also important towns in the Central City district. Just a few miles up the gulch, Russell Gulch was founded in 1859 by Green Russell, one of the central figures in the first wave of prospectors that entered Colorado Territory in 1858.

Georgetown began as a small settlement in 1859 and would eventually be Colorado's first important silver city.

Many towns were founded in this region during the early 1860s - many of the became ghost towns, but some became important cities that still stand today.

Much later, in 1891, gold was discovered in the mountains west of Colorado Springs. The strike was the most important late gold discovery in the West, and the cities of Cripple Creek and Victor, along with many smaller towns, composed what would become the nation's second largest gold producing district.

Despite Colorado's extreme terrain and harsh winters, prospectors quickly pushed deep into the mountains in search of gold.

In August 1859, George Spencer along with 28 other men and one woman, crossed the continental divide and discovered rich gold placers in the Blue River Valley. The camp founded at these diggings would become known as Breckenridge, and over 160 years later the town of Breckenridge thrives.

In 1860 placer miners pushed deeper into the mountains, and the settlement of Oro City was established among the gold fields of California Gulch. The settlement was mostly abandoned by 1865 as the placer gold ran out. A few years later, lode gold mining was attempted and the district limped along for years in obscurity.

Ultimately it was discovered that the black sands that were so difficult to separate from the placer gold was actually rich silver ore. The bonanza that followed is the stuff of legends, and the new city of Leadville became one of the nation's richest mining cities.

Other high mountain camps worthy of mention are Aspen and Crested Butte, both important mining centers that eventually transitioned to ski resorts and popular tourist areas.

Although prospectors entered the San Juan Mountains of southwest Colorado as early as 1861, the isolation and ruggedness of the area, combined with the ever-present danger of conflicts with the Ute tribes, resulted in the region being developed very slowly at first.

Not until the mid-1870s did prospectors enter the area in numbers that allowed for permanent settlements. Howardsville, established in 1874, was the first seat of government in the area. Soon other towns rose to prominence, including nearby Silverton.

Ouray was settled in 1876 and competed with Silverton as the main supply hub for the rich Red Mountain district. In 1878 Telluride was established and would become one of the state's most important mining centers.

Numerous smaller camps, some of them company towns like Camp Bird, Smuggler, and Tomboy, were built at high altitude and in seemingly impossible terrain.

Today, the San Juan Mountains are a popular tourist destination and one of the best places in the country to experience mining history first hand.